So, You Want to Eat a Beaver

So, you want to eat a beaver (Castor Canadensis). I’m asked many times if I eat the animals I trap and the answer is occasionally I do. And one of the things I get asked is do I eat the beaver I trap and yes I do. As a matter of fact it was pretty much the only meat I ate in the winter of 2008, I had just went thru a separation and money was tight as it is at times with these sorta things and was trapping to make a living. And beaver meat is high in protein and probably better than beef and supplemented well, well except for a good ribeye. So, where do ya start, well first you have to find one. Beaver are pretty much located throughout N. America. Most are trapped and some are shot depending on your state regulations. It’s really not hard to find one or you may know a trapper or a landowner that may have them in a pond or river etc. I prefer to eat a fresh beaver for the reason that when trapped they are not bled out. If it’s trapped I would go 2 days max to have good tasting meat. We’ll take care of the blood shortly.
Taking care of a beaver you’re planning to eat is important as it is with most game, to ensure the quality of the meat. Beaver are mainly caught in or near the water and are pretty much clean to begin with. Skinning them and the way you do it is important to have good tasting meat.
First lay the beaver on its back on a table or tailgate that’s clean, if it’s not clean layout a garbage bag to lay the beaver on. For your initial cuts I like to use a filet knife. I start out by sticking the knife in at the base of the tail with the sharp edge up and just below the skin, then run your knife up to the vent but stopping about an inch away and then run the knife around the vent till you’ve cut the hide all the way around the vent. It’s important to add that any juicy liquid coming out of the vent if any, needs to be dabbed off with paper towel so that any of that juice does not leak onto the meat. This stuff is oil from the castor gland and has an interesting odor, not a real bad odor just interesting but can ruin the flavor of the meat in an instant, Castor is used in cosmetics and at times goes for $50.00 a pound, but we’ll touch on that later. Once the vent is circled, run your knife straight up the center of the belly just under the skin, you don’t have to get into the thin layer between the hide and stomach. Continue all the way up to the chin until you come through the bottom lip. Next, make a cut through the skin at the base of the tail where the fur stops and the tail begins and cut all the way around the base. Basically ringing it. Once that’s done you need to next cut off the feet. The diagram shows where these cuts are. Start by cutting from the underside of the foot where the heel pad meets the fur and then cut all the way around the foot, once the foot is ringed cut deeper into the underside where you started, this will cut the tendons. Beaver have soft or weak joints by design that aid in swimming and once you make that cut you can grab the foot and twist it off, you might have to aid it with cutting to completely take it off, but it’s relatively easy. 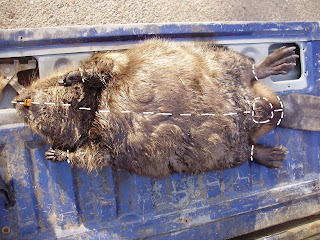 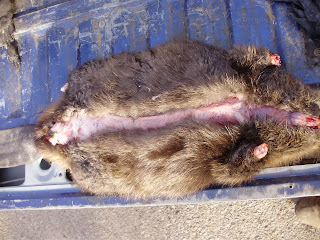 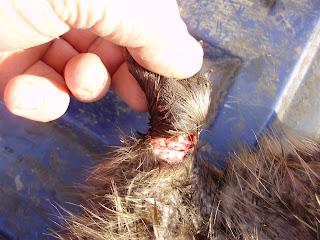 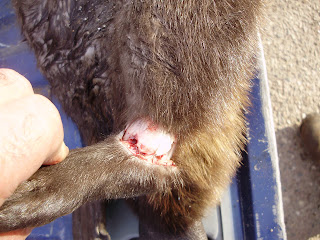 Once you have the feet off it’s time to start peeling the hide off. Now is the time to swap out the filet knife with a hunting knife, they seem to work best. The best ones I’ve found are the Buck(skinner) or the Shrade (sharp finger) both these knives have the right curve for skinning beaver, but whatever you have is fine, as long as it’s sharp. To start getting the hide, grab the hide about midway between the chin and vent. Note: the reason I call it a vent is because it’s similar to a birds, just one opening and all reproductive parts are inside, even males. Anyway, it doesn’t matter which side of the cut you grab. While grabbing the hide pull it away from the carcass and make a sweeping motion just under the hide going along the belly and ribs, keep working the knife this way while cutting and pulling the hide the whole length of the initial cut. Then do the same with the other side. Once you hit the legs it gets a little tricky, but once you figure it out it’ll be a snap.
Getting the leg through 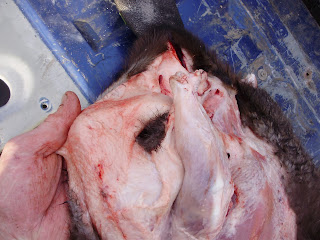 Pulling the hide away 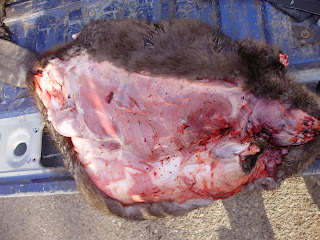 Pick any leg to start and pull the loose hide over the leg and feel for the leg. I usually grab the hide between the thumb and fore finger and use the other fingers to push against the leg from the fur side until the hide slips over the severed part of the leg bone. This will help push the leg up so you can run the knife along both sides of the leg and keep cutting along the leg until the hide is separate from the leg all the way around. Repeat this with each leg until your hide is basically laying flat and the beaver basically looks like it is just lying on the hide and the legs are out. 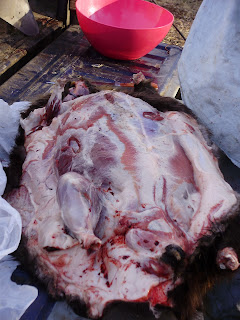 Now take the beaver by the head and base of tail and flip it over on its belly on a clean surface. Starting on whichever side you want, take and grasp the loose pelt like you did while skinning down the belly and just continue pulling and cutting along the beavers sides until you’re to the spine, then repeat the same on the other side the whole length of the pelt. 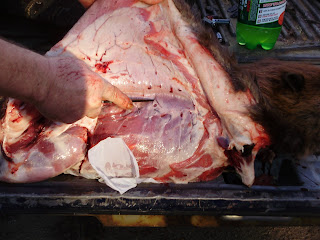 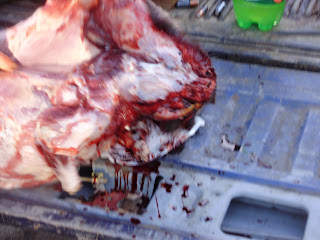 Working it off the head 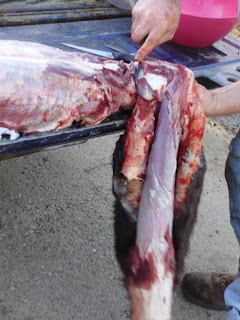 Fold the pelt in half skin to skin, then fold in half and again, fur to fur. I will usually then put the pelt in the freezer till another day when I have time to flesh them out or sell just the way they are. Beaver pelts are worth a few bucks if they’re taken in the fall and winter, and in early spring.

Now for the meat. There are only a couple things I take off the beaver for meat, which are the hind quarters and the backstraps. With the beaver still on its belly, take the filet knife and cut along the spine, then peel the meat back and keep cutting along the length of the back, staying close to the bone, working the backstraps off like you would on a deer.
Cutting out the straps 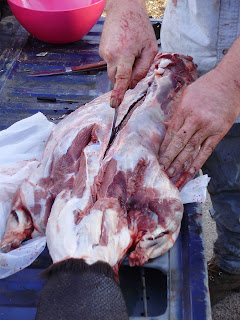 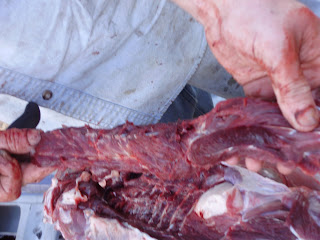 Once the straps are removed move to the hind quarters. Grab a hind quarter and move it around so you know where the hip joint is close to the spine and make a cut to the joint. Do this on both hinds. Now you can flip the beaver onto its back. You should be able to see or tell where the joint is from this side by now and cut into that joint and then all around. Now just bend the whole quarter back to pop and reveal the joint and finish severing the joint and hind quarter.
Cutting off a hind quarter 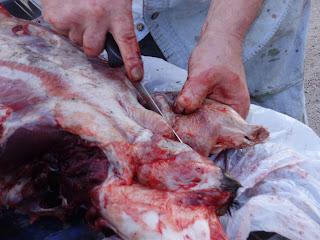 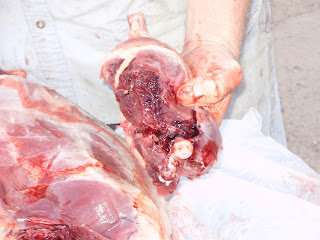 Now that you have the hind quarters off that’s pretty much it, for the meat that is. Now just set the meat aside for a minute or two. You’ll notice if you look at the vent that behind it there is a gray mass on both sides, these are the castor glands and fur buyers buy these, basically take and cut away the membrane that holds them in place. But don’t cut into the gray, just the thin, basically clear membrane and gently work the castors out peeling it away from the membrane. When you’re close to getting it out you’ll notice they are joined together at the vent, just cut the vent off with the castor. It’ll kind of resemble rounded saddle bags.
Beaver Castor glands 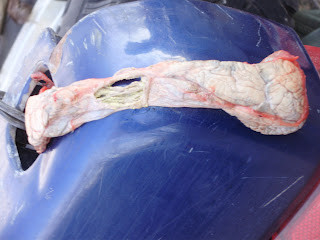 You can put them in a Ziploc and freeze fresh or hang them on a nail in a shed out of sunlight to dry as well.  If you get enough of them they’re worth saving, fur buyers pay by the pound.
With clean hands take the meat you just cut off and trim any fat that you can, then rinse under cold water washing whatever blood you can. Now take a large bowl and throw in a table spoon of salt and start filling with water to dissolve the salt, then add in the beaver meat. Once you have everything covered in the salt water put it into the fridge until the next day. The next day take and rinse the meat under cold water. Then proceed to cut the meat off the bone on the hind quarters and any fat that you missed the first time. 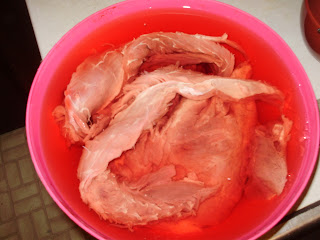 At this point there is a couple things you can do. You can freeze it in freezer bags for a later date or prepare it. If you’re going to prepare it you can do a couple things. One is you can chunk up the meat and throw it in a slow cooker until the meat just falls apart then just add your favorite barbeque ingredients and finish cooking. Or you can par boil it for about  20 minutes and drain. Then you can flour it with a mixture of salt and pepper or your favorite spices then pan fry. My favorite is to just chunk or cube it raw, then fry/sauté in butter and salt and pepper until done add in fried onions and mushrooms. Then add in fried potatoes and cover the whole thing in shredded Colby or Monterey jack cheese, cover with a lid under low heat until the cheese is melted and serve. Most people who have tried and ate the beaver I have cooked in these 2 ways said they could not tell the difference between beef or beaver and said the beaver actually tasted better. I sometimes grind the beaver into burger and they taste great. Anything you can do with beef, you can do with beaver, well except a good steak. Take a walk on the wild side and give it a try. Beaver, it's what's for Dinner.

Posted by Empath Outdoors at 1:35 AM 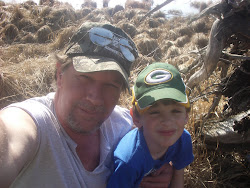 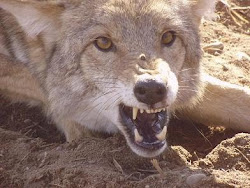 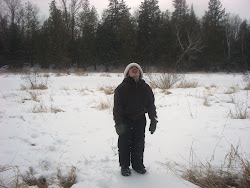 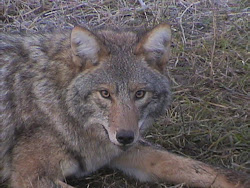 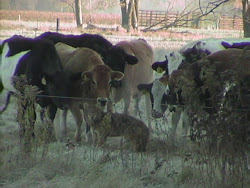 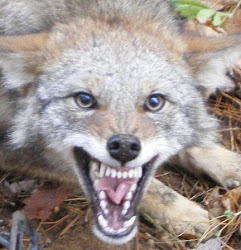 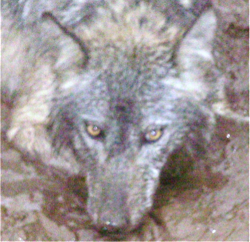 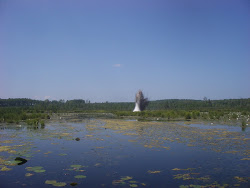